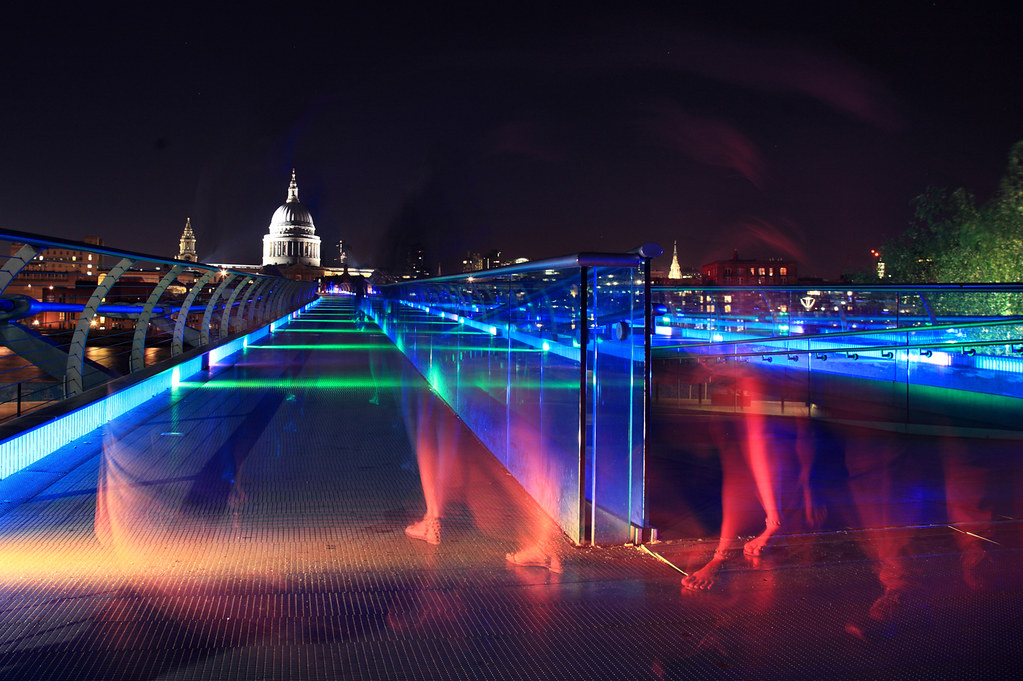 The Ghosts Of Millennium Bridge

Capturing ghosts with a long exposure, The Millennium Bridge lit up for The London 2012 Festival and Olympics from the South side of the bridge looking North, with St Paul's Cathedral in the background. August 2012.

The Millennium Bridge, officially known as the London Millennium Footbridge, is a steel suspension bridge for pedestrians linking Bankside withThe City. Construction of the bridge began in 1998, with the opening on 10 June 2000. Londoners nicknamed the bridge the "Wobbly Bridge" after participants in a charity walk on behalf of Save the Children to open the bridge felt an unexpected and, for some, uncomfortable swaying motion on the first two days after the bridge opened. The bridge was closed later that day, and after two days of limited access the bridge was closed for almost two years while modifications were made to eliminate the wobble entirely. It was reopened in 2002.

The southern end of the bridge seen here is near the Globe Theatre, the Bankside Gallery and Tate Modern, the north end next to the City of London School below St Paul's Cathedral. The bridge alignment is such that a clear view of St Paul's South façade is presented from across the river, framed by the bridge supports.

The design of the bridge was the subject of a competition organized in 1996 by Southwark council and RIBA Competitions. The winning entry was an innovative "blade of light" effort from Arup, Foster and Partners and Sir Anthony Caro. Due to height restrictions, and to improve the view, the bridge's suspension design had the supporting cables below the deck level, giving a very shallow profile. The bridge has two river piers and is made of three main sections of 81 metres , 144 metres and 108 metres (North to South) with a total structure length of 325 metres the aluminium deck is 4 metres wide. The eight suspension cables are tensioned to pull with a force of 2,000 tons against the piers set into each bank — enough to support a working load of 5,000 people on the bridge at one time.