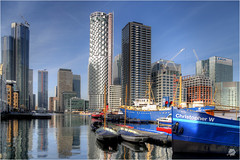 Here you will see photographs of The South Dock, part of the West India Docks from September 2001 to present.

I first photographed the view from the east end of The South Dock on the 10th September 2001 using a medium format film camera. While I was waiting in a bookshop for the film to be processed I heard of the terrible events of September the 11th. At this time the second phase of Canary Wharf was being built, from then onwards I tried to get back to the same point every September to record the changes in this view.

In 2017 with the construction of Wood Wharf including One Park Drive, South Quay Plaza and Landmark Pinnacle at the west end of the dock this view started to change dramatically. I have done my best to try and capture these changes.

Additional photographs can be found by using the search function. Selected searches will open as a new tab in Flickr.