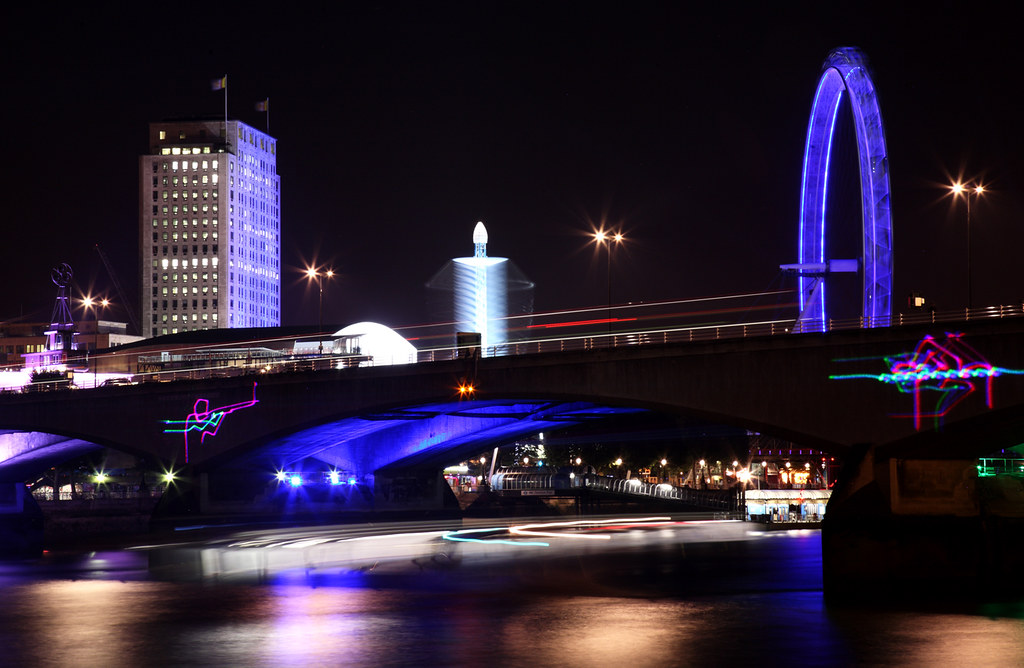 Waterloo Bridge During The Olympics

Waterloo Bridge seen from Temple lit up for The London 2012 Festival and Olympics. The Shell Centre, a fairground and The London Eye in the background with a boat passing under the bridge. This is the fifth Bridge forming part of The Illuminations.

Waterloo Bridge is a road and foot traffic bridge, the name of the bridge is in memory of the Anglo-Dutch and Prussian victory at the Battle of Waterloo in 1815. Thanks to its location at a strategic bend in the river, the views of London (Westminster, the South Bank and London Eye to the west, the City of London and Canary Wharf to the east) from the bridge are widely held to be the finest from any spot at ground level.

Shell Centre is one of the two "central offices" of oil major Shell (the other is in The Hague). Shell Centre is located on the Belvedere Road in the London Borough of Lambeth. It is a prominent feature on the South Bank of the River Thames near County Hall, and now forms the backdrop to the London Eye. Shell Centre was constructed in 1961, to a design by Sir Howard Robertson, and the tower stands at 107 metres with 27 storeys and extends three storeys below ground.

The tower was the first London office tower to exceed the height of the Victoria Tower of the Palace of Westminster. It replaced the Midland Grand Hotel as the tallest storied building in London, and the Royal Liver Building as the tallest in the United Kingdom. On completion the building also held the record for the largest office building, by floor space, in Europe.