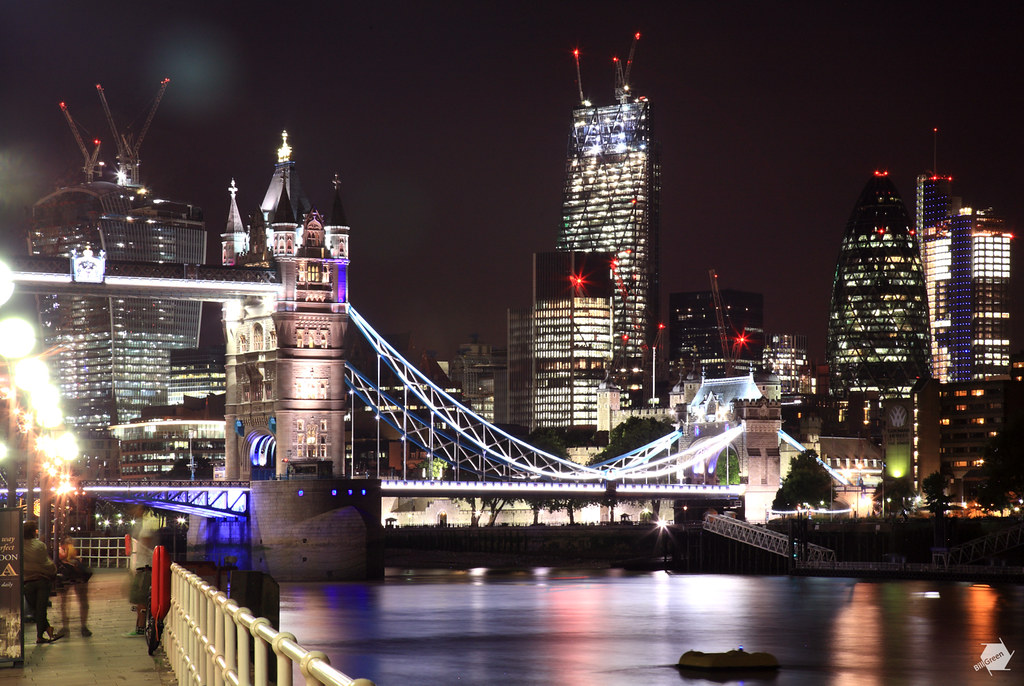 Tower Bridge And The City

Tower Bridge lit up with The City in the background featuring from left to right: The Walkie Talkie (20 Fenchurch Street), Tower 42, The Leadenhall building, The Gherkin (30 St Mary Axe) and Heron Tower.

Built between 1886 –1894 Tower Bridge is a combined bascule and suspension bridge. It is close to the Tower of London, from which it takes its name, and has become an iconic symbol of London. The bridge consists of two towers tied together at the upper level by means of two horizontal walkways, designed to withstand the horizontal forces exerted by the suspended sections of the bridge on the landward sides of the towers. The vertical component of the forces in the suspended sections and the vertical reactions of the two walkways are carried by the two robust towers. The bascule pivots and operating machinery are housed in the base of each tower. The bridge's present colour scheme dates from 1977, when it was painted red, white and blue for Queen Elizabeth II's silver jubilee. Originally it was painted a mid greenish-blue colour.

You can visit The Tower Bridge Exhibition every day and explore inside the bridge. At night the two walkways are used for events and can be hired privately. I have had the pleasure of working at a number of these events as a DJ and it is great but unusual place to play as they consist of two long corridors spanning the length of the bridge. The lower part of the bridge regularly opens to let tall ships through.