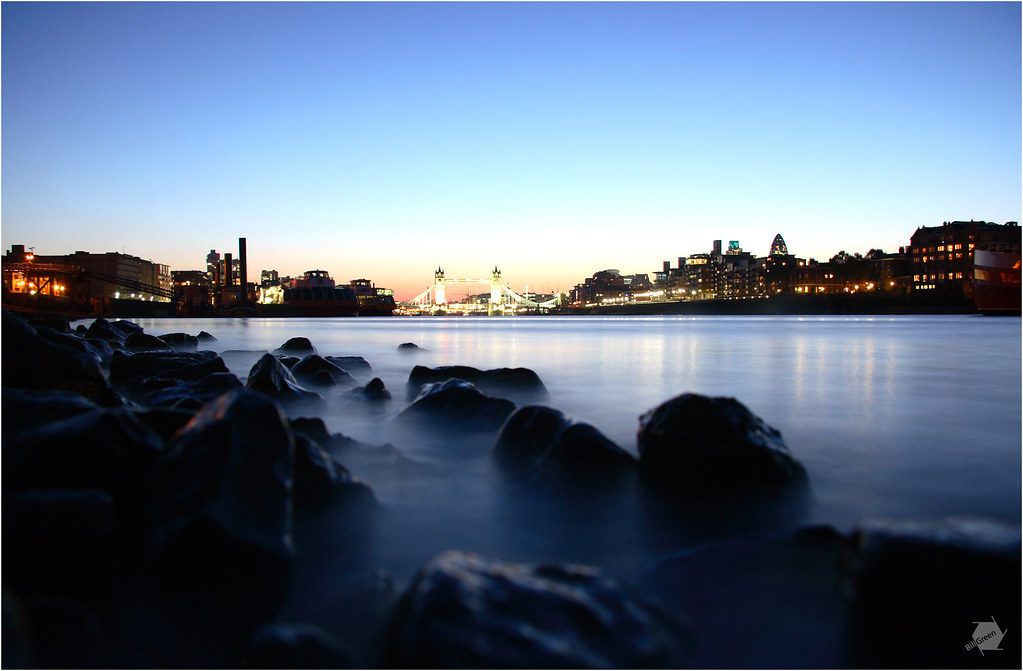 The Pool Of London

Just below The Angel which is a Samuel Smiths Pub at low tide on the riverside at Rotherhithe, Thames Path South Side. Looking West to Tower Bridge showing the area previously known as The Pool of London, once the busiest shipping port in the world before the introduction of the Docklands.

Originally, the Pool was the stretch of the River Thames along Billingsgate on the south side of the City of London where all imported cargoes had to be delivered for inspection and assessment by Customs Officers, giving the area the name of "Legal Quays". Smuggling, theft and pilferage of cargoes were rife on both the busy open wharves and in the crowded warehouses. The term was later used more generally to refer to the stretch of the river from Rotherhithe upriver to London Bridge, with the venerable bridge being the farthest reach that could be navigated by a tall-masted vessel.

The Pool was of vital importance to London for centuries - as early as the 7th century the Venerable Bede wrote that the Pool was the reason for London's existence - but it reached its peak in the 18th and 19th centuries. By this time the river was lined with nearly continuous walls of wharves running for miles along both banks, and hundreds of ships moored in the river or alongside the quays. The Pool saw a phenomenal increase in both overseas and coastal trade in the second half of the eighteenth century. Two thirds of coastal vessels using the Pool were colliers meeting an increase in the demand for coal as the population of London rose.

Coastal trade virtually doubled between 1750 and 1796 reaching 11,964 vessels in 1795. In overseas trade, in 1751 the pool handled 1,682 ships and 234,639 tons of goods. By 1794 this had risen to 3,663 ships and 620,845 tons. The congestion was so extreme that it was said to be possible to walk across the Thames simply by stepping from ship to ship. London's Docklands had their origins in the lack of capacity in the Pool of London which particularly affected the West India trade. In 1799 The West India Dock Act allowed a new off-river dock to be built for produce from the West Indies and the rest of Docklands followed as landowners built enclosed docks with better security and facilities than the Pool's wharves.