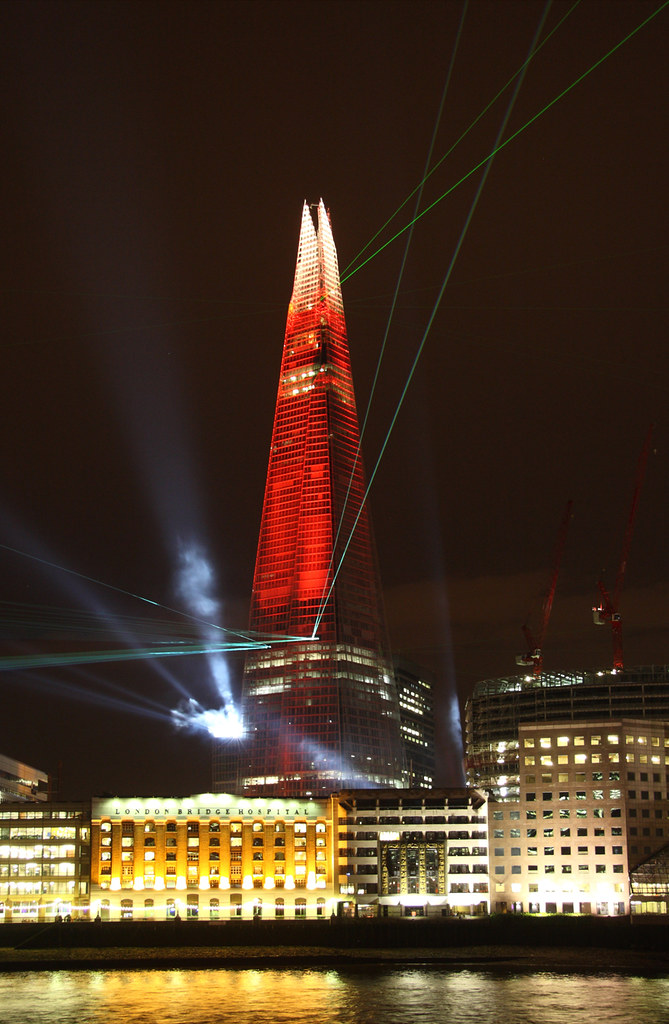 The inauguration of The Shard of Glass in July 2012 taken from The Thames Path North bank. The Shard formerly known as London Bridge Tower, is a 95-storey skyscraper. Its construction began in March 2009; it was topped out on 30 March 2012 and inaugurated on 5 July 2012 as seen here. It opened to the public on 1 February 2013.

Standing 306 metres high, the Shard is the tallest building in the European Union, and the second-tallest in Europe, after the Mercury City Tower in Moscow. The Shard is also the second-tallest free-standing structure in the United Kingdom, after the concrete tower at the Emley Moor transmitting station. The glass-clad pyramidal tower has 72 habitable floors, with a viewing gallery and open-air observation deck – the UK's highest – on the 72nd floor, at a height of 244.3 metres.

The Shard was designed in 2000 by Renzo Piano, an Italian architect previously best known for creating Paris’s Pompidou Centre in collaboration with Britain’s Richard Rogers. That year, the London-based entrepreneur Irvine Sellar decided to redevelop Southwark Towers, a 1970s office block next to London Bridge station, and flew to Berlin in March 2000 to meet Piano for lunch.

According to Sellar, the architect spoke of his contempt for tall buildings during the meal, before flipping over the restaurant’s menu and sketching an iceberg-like sculpture emerging from the River Thames. He was inspired by the railway lines next to the site, the London spires depicted by the 18th-century Venetian painter Canaletto, and the masts of sailing ships.

In July 2002, the then-Deputy Prime Minister, John Prescott, ordered a planning inquiry after the Shard development plans were opposed by local authorities and heritage bodies, including the Royal Parks Foundation and English Heritage. The inquiry took place in April - November 2003, the Office of the Deputy Prime Minister announced that construction had been approved. The government released a letter stating that: "Mr Prescott would only approve skyscrapers of exceptional design. For a building of this size to be acceptable, the quality of its design is critical. He is satisfied that the proposed tower is of the highest architectural quality."

Now one of the most popular and photographed buildings in London, I was lucky to get a ticket for a sunset view on it's opening day and see the incredible view from the top, unfortunately the use of tripods is not allowed at 'The View'. Using my bag as an impromptu tripod I did manage to get a couple of decent shots, it was a great sunset.

There are now plans to build another Shard next to this one to be called the ‘Slender Tower' but it will only have 27 floors rather than 87. The Shard skyscraper was recently awarded the title of 2013 Best Tall Building Europe by the Council on Tall Buildings and Urban Habitat.