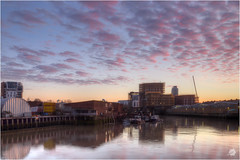 Started for the European River Corridor Improvement Plans project between May 19th - June 17th 2014. Because there is so much construction taking place I have revisited this project from 2016 onwards as the landscape changes. Special thanks to my old college tutor Richard Lawrence for letting me have access to the roof of the APT Studios for many of these photographs.

Starting at Deptford Creek on the Deptford / Greenwich boarder you travel up The River Ravensbourne through Creekside, Broadway Fields, Brookmill Park and Cornmill Gardens finishing in Ladywell Fields near what was the old Catford Dogs dog racing track. The River Ravensbourne is a tributary river to The Thames which starts in Bromley and has a history going back to Roman times. Since 2006 Lewisham Council has made a great effort to re-naturalise a forgotten urban river. The European River Corridor Improvement Plan is a three year project to write a policy on how to improve river corridors with nine European partners from five countries.

Thank you to all the eighteen people who have modelled for this project and those who assisted me. In total 2000 photographs were taken over these four weeks although many of them were high dynamic range sets.

A3+ Print editions are restricted to 5 copies of each photograph.