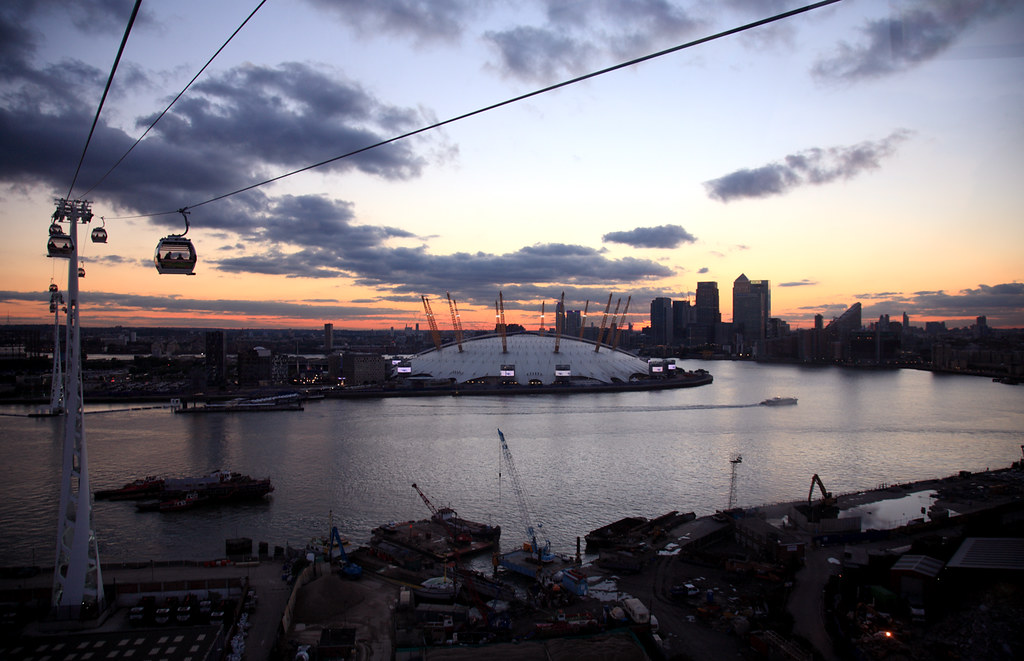 Taken from a cable car looking North. The Emirates Air Line (also known as The Thames Cable Car) is a cable car link across the River Thames in London built with sponsorship from the airline Emirates. The service opened on 28 June 2012 and is operated by Transport for London. It has an average ridership of 31,601 passenger journeys a week.

The service, announced in July 2010 and estimated to cost £60 million, comprises a 1-kilometre gondola line that crosses the Thames from the Greenwich Peninsula to the Royal Docks. Construction began in August 2011. The cable car is based on Monocable Detachable Gondola (MDG) technology, a system which uses a single cable for both propulsion and support, such as that used on the metrocable in Medellín, Colombia. The MDG system is reportedly cheaper and quicker to install than a more complex three-cable system which would allow for larger-capacity cars. The Cable Car needed to be built in time for the 2012 London Olympics to take visitors between The North Greenwich Arena (O2) which held athletics and The Excel for boxing, judo and other sports.

I went on The Cable Car the day it opened and have been many times since, if you buy ten tickets at a time you can travel for £1:60 a time. The views are amazing, it takes you to Royal Victoria Docks on the North side, here you will find water sports, a bar on a converted tug boat and a man made sandy beach. Although people do swim in the docks it is not really safe to do so. The walk around Royal Victoria Docks is one of the best in London I think, these docks were built by the victorians for the introduction of steam ships and are huge.