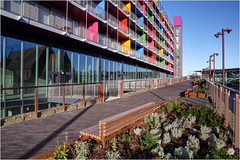 When John Miller who had been the Head of Planning in Lewisham Council retired after thirty five years the Planning Department commissioned me to photograph many of the projects he had planned in his long career. These photos along with others I had taken previously for The River Ravensbourne project were made into a photo book "in recognition of his hard work, vision and the lasting legacy he has left throughout the Borough."

These images are available as prints and maybe for use in other contexts by negotiation. They are in geographical order going from North to South of The London Borough of Lewisham.