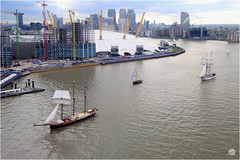 Sunrise, Pirate Ship, Fireworks and The Parade of Sail seen from The Cable Car.

The sunrise's over Greenwich and the Tall Ships Saturday 29th August which have received 10K 'likes', 1K shares and many comments collectively on the Londonist and Time Out Facebook pages, Fireworks on Sunday 30th August and the rainbow over Santa Maria Manuela Thursday 27th August which proved popular on Twitter.

I had been anticipating this event for some time, the largest collection of tall ships on The Thames since 1989 but the whole festival far exceeded my expectations. In this set you will visit all four festival sites and see three of the five firework displays which took place.

The four sites were Maritime Greenwich, Greenwich Peninsula, Wood Wharf in Canary Wharf and Royal Arsenal Woolwich. If you view this set as a map you will see these locations with cameras locating each photograph, click on the camera to reveal a thumbnail photograph, clicking on the photograph will take you to a larger version.

During the festival I cycled many miles and traveled by boat and train to get different views. I used Twitter to show photographs in progress, thanks to Mr Greenwich and then Royal Greenwich the official page for retweeting by the end of the week my photographs had had 7,859 views.

Prints from £10 and Canvases are available please visit Prints page.

I hope you enjoy the festival.